Making friends and attracting people is really hard for some guys. They do everything possible to get noticed but nobody seems to notice them.

Sometimes, they wear expensive clothes, expensive jewelry, and even jump into unrelated conversations, just to get people’s attention.

Yet, nobody notices them.

But the sigma males are always the cynosure of all eyes. From the way they comport themselves to the way they talk rationally, everybody wants to be friends with them.

Even if you are meeting the sigma male for the first time, his mannerism will make you like him instantly.

They don’t need to show off, wear expensive clothes, bully people, or talk lousily to be noticed.

Everything about them is exceptional and attractive.

So, here are 5 behaviors and habits that make the sigma males instantly likable.

#1. They Call People By Their Names

Sigma males are deliberate about everything they do. There’s no better way to get a person’s attention in a crowd than calling them by their names.

Everybody loves their names. And we can easily pinpoint it when someone calls us by our names in a large crowd.

People always feel better when you call them by their names. It gives them a sense of importance when you remember their names.

Sigma males are particular about people’s names. And that is why they don’t hesitate to take a mental note of everybody when meeting them for the first time.

#2. They Give Genuine Compliments to People

As you already know, sigma males understand human nature. And they know that everyone loves genuine compliments.

When a sigma male notices something he likes about someone, he doesn’t hesitate to tell them.

They believe that it’s best to always let other people know what’s exceptional about them.

And when you speak positively about someone, other people will associate the traits you use to describe that person with you.

In psychology, it’s called spontaneous traits transference. That is the tendency of other people to perceive you as possessing the very traits you describe in others.

Sigma males know this fact, and that is why they don’t hesitate to give people genuine compliments.

And this makes them instantly likely, even if you are meeting them for the first time.

#3. They Don’t Try to Impress People

The lone wolves always exude a mysterious and elusive aura because they don’t try to impress people.

They may not be perfect but they know how to use their own flaws and that of other people to their advantage.

Unlike Beta and Omega males, sigmas don’t make efforts to impress anybody. They will act naturally and let people know how they genuinely feel about any issue.

What people think about him or his opinion doesn’t bother him. He only focuses on the things that give him peace of mind.

#4. They Look at the Positive Side of Every Situation

The sigma males always have the nicest and most positive things to say in every situation.

Regardless of how bad things are, you will always feel an aura of happiness and peace when around the sigma males.

The lone wolves hardly complain. And when they do, just know that whatever they complain  about is too important to be neglected.

They emit this bright positive energy that attracts people to them.

#5. They Actively Listen and Let Others Talk About Themselves

Whenever you engage sigma males in a conversation, they passionately listen to you. It doesn’t matter what you have to say, they will listen and let you talk about yourself.

That explains why people enjoy their time around the sigma males.

Even during meetings, sigma males will listen to everybody’s opinions and contributions before making brilliant contributions.

Previous Article Is It Normal For My Boyfriend to Hit Me?
Next Article 5 Signs Sigma Males Are Not Compatible With a Woman 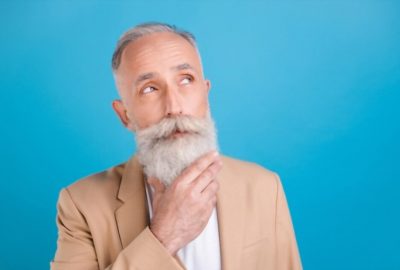 Overthinking is a dangerous habit that …